The STEAM project kickoff meeting took place with great success at the Tassos Papadopoulos Building of the Cyprus University of Technology in Limassol on February 26th, 2019.

“STEAM (Sea Traffic Management in the Eastern Mediterranean) is a three-year project that has started in Jan. 2019 with a budget of approximately one million EUR funded by the Cyprus Research Promotion Foundation.”

The STEAM project is coordinated by the Cyprus University of Technology (CUT) with the Research Institutes of Sweden (RISE) participating in the project as a Foreign Research Organization. Furthermore, the STEAM consortium consists of the Cyprus Ports Authority, the Cyprus Shipping Association and the private companies Tototheo Maritime, A.T. DeLevant Business Solutions, and Cyprus Subsea Consulting and Services. Also, very important is the participation in the project through the STEAM Associated Stakeholder Network of established stakeholders of the Cyprus maritime sector including the Cyprus Shipping Chamber, the Maritime Institute of Eastern Mediterranean (Mar.In.E.M.), and the private companies that currently handle the operations at the Port of Limassol: DP WORLD Limassol, EUROGATE Limassol Container Terminal και P&O Maritime. Moreover, a STEAM Advisory Group has also been created with established individuals from the international maritime sector including Trond Andersen from the Port of Stavanger in Norway, Michael Bergman from BM Bergmann-Marine, Albert Gonzalez from the Port of Barcelona in Spain and José Andrés Giménez Maldonado from Valenciaport Foundation in Spain.
The kickoff meeting was attended by the project partners, as well as other stakeholders from both the academic and the private sector. Dr. Michalis Michaelides, the project coordinator, started the meeting by presenting the project’s objectives and actions, the next steps, the work packages, the distribution of the work and roles within the project, and provided clarifications to the meeting participants. Next, the project partners had the opportunity to present their own activities and specific responsibility within the project. Finally, Dr. Mikael Lind from RISE presented some of the results of the Sea Traffic Management (STM) Validation project (September 2015 – June 2019), and more specifically of the Port CDM (Collaborative Decision Making) that was validated in nine ports across Europe including the Port of Limassol. As highlighted by Dr. Lind:

“Through the STEAM project, we aim to establish Cyprus and the Eastern Mediterranean region as the showcase of STM for the world.”

After the meeting, a reception followed.
The overall objective of STEAM is to effectively manage maritime traffic in the Eastern Mediterranean in terms of safety and environmental sustainability and more specifically to develop Port of Limassol to become:

 A world-class transshipment and information hub adopting modern digital technologies brought to the maritime sector, and
 A driver for short sea shipping in the Eastern Mediterranean through enhanced services based on standardized ship and port connectivity.

Towards this end, the ports of Cyprus, and especially the Port of Limassol will have a vital role to play due to its strategic location, as an information hub, exchanging information with both nearby ports and ships in the Eastern Mediterranean area for optimizing the ships’ routes, expanding the planning horizon for port operations, and avoiding possible dangers. The geographical location of Cyprus encourages the use of Cyprus ports as transshipment hubs for short sea shipping. In the STEAM project, the implementation of the STM concept will be significantly extended and enhanced by the successful testbed conducted at the Port of Limassol through the further development of Port CDM, which will enable real-time situation awareness to all participants involved in maritime activities in the ports of Cyprus. Moreover, the Port of Limassol will be modernized with innovative technological solutions and advanced data analytics providing new decision-support tools and services for maritime stakeholders. 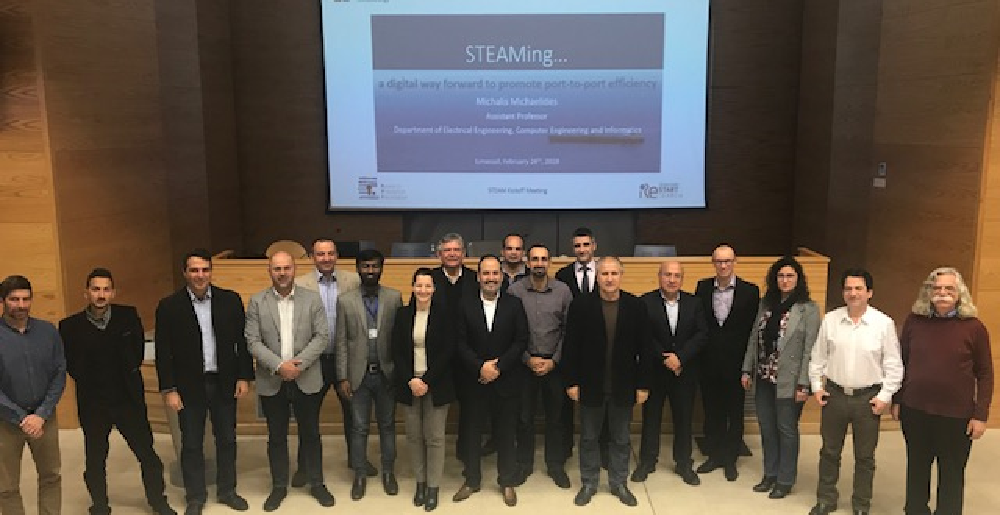 We are very happy to announce that the first book on Maritime Informatics has... read more

A Memorandum of Cooperation was signed by the Cyprus University of... read more

Press release: PortCDM at the Port of Limassol as an enabler of Short Sea Shipping in the Eastern Mediterranean

We are very happy to announce that the United Nations now... read more